For anyone that doesn’t know Cheltenham it is a Regency spa town and this is an example of the houses you will find there – usually painted and quite often adorned with wrought iron balconies and canopies – from my first visit when I attended my interview for the fashion course I fell in love with Cheltenham and this house was always one of my favourites just off the town centre – I love the intricate iron work. 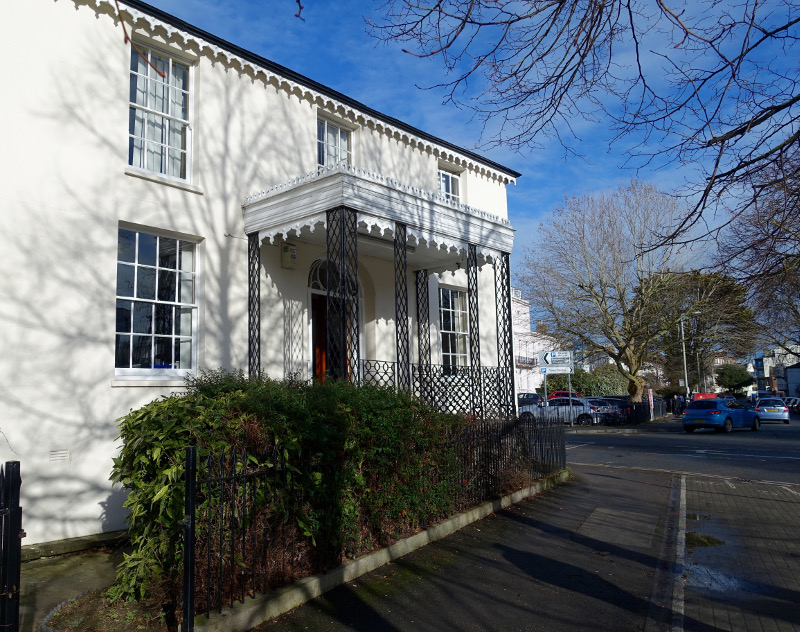 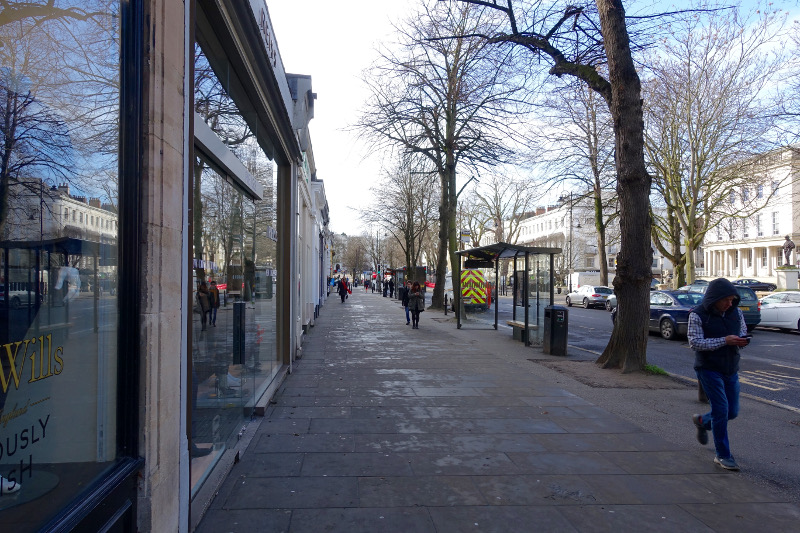 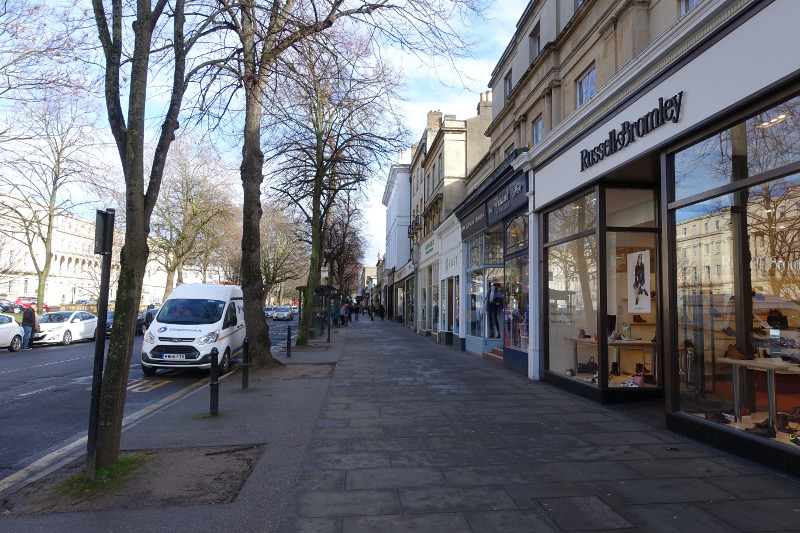 – it felt very much as it always did with Cavendish House (now House of Fraser) at the top of the street –  but many of the other shops along the stretch had changed.  It is a shame the trees are bare at the moment it looks quite splendid when they are in full leaf.

Habitat was at the very bottom of the street in the 70’s – our favourite shop because it was so modern and different then – but now long gone.  I remember that on a Saturday morning it was usual to see many of the wealthy shoppers parading the Promenade and Montpellier in their furs and jewels accompanied by their Afghan hounds and other beautifully groomed long-haired pedigree dogs.  Such a contrast to my home town of Huddersfield where the shoppers were much more about a bargain from a mill shop or the markets.

Behind the Promenade lies Regent Street with the Everyman Theatre – this has quite rightly received the Heritage Award for the complete refurbishment in 2011. 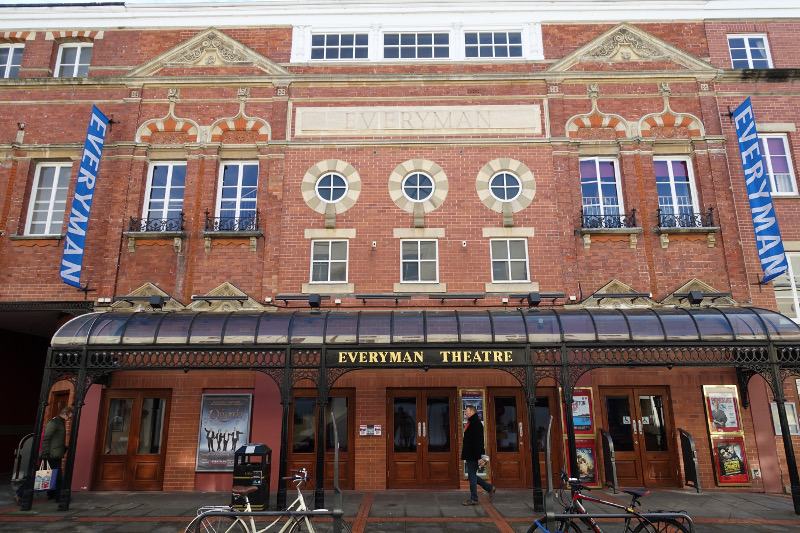 We eventually came to the High Street – the old HSBC bank (then the Midland) is still on the corner – I had my first bank account here and ran up an overdraft of £10 in my first term and was called in by the bank manager who looked at me sternly from across his desk and told me in no uncertain terms that overdrafts were a definite no no – putting the fear of God in me I went straight out to get the local paper and found myself a weekend job at the nearby hospital to pay it off and then went to bank with the Co-op where the two ‘old’ ladies on the counter upstairs always addressed me by my christian name and enquired after my progress on the course.

This is quite a famous pub because of the lovely old tiled exterior – it was never our local but it is good to know it has survived demolition.  Our local was still there but I expect the owners have long retired. 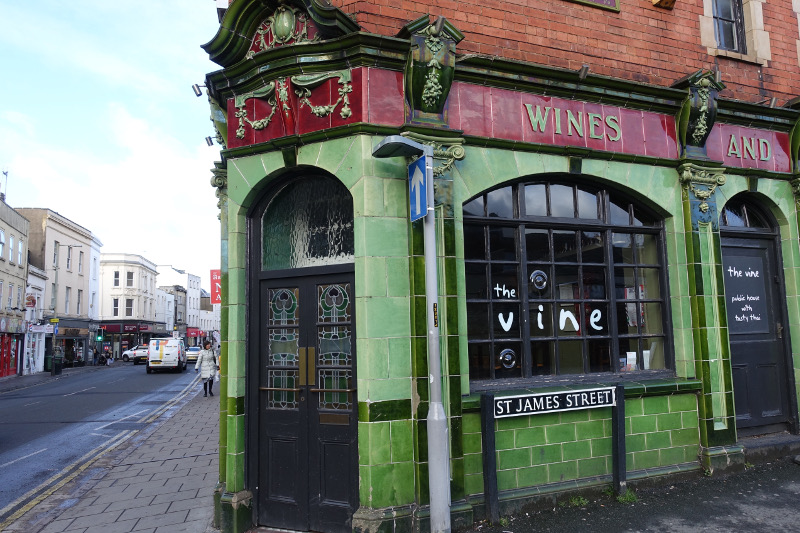 Further along the little old fashioned jewellers shop is still in business (surprisingly it looks just as it did then) – this is where we chose my engagement ring –  a diamond between to deep blue saphires and cost a hefty £28.  I still have the handwritten receipt and of course the ring! 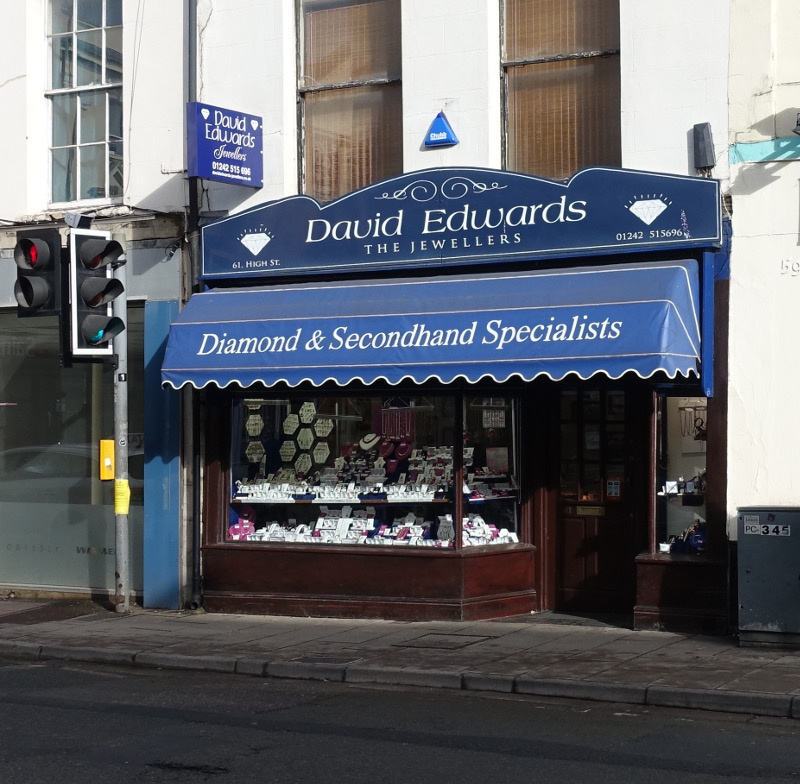 Turning off the High street into one of the many side alleys we just had to go and see where our second rented house once stood – now demolished and the site occupied by a Lidl supermarket.  This picture is all that is left of 30 Grosvenor Terrace.  (I am the one on the bike and as you will notice beards were very much in fashion then!) 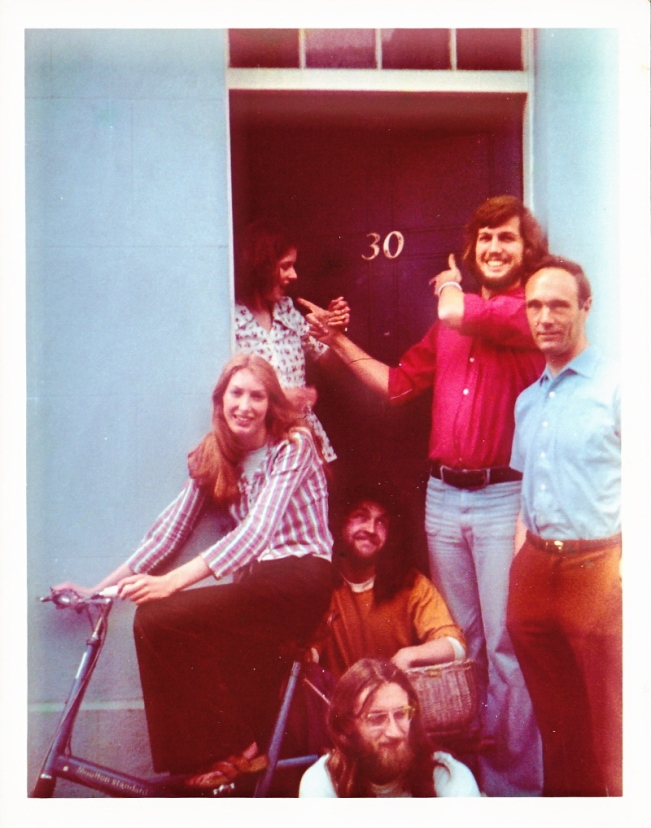 Our previous house called simply ’58’ was out on the Prestbury Road, which back then was a rather fine row of large semi-detached Regency properties with our very shabby student house letting the side down.  It now stands looking very grand and much more in keeping with its well maintained neighbours who have managed to keep their beautiful wrought iron canopies intact.

This house holds very special memories –  this is where I met both my life long friends and my husband – this is where we packed more fun into the few years we lived here than the rest of my life.  In all the time we lived here we never had a key – there was no lock to the front door so the occupants and everyone else just walked in and out – quite unbelievable now but I can assure you as poor students on very frugal grants we certainly had nothing of value to pinch so it was never a problem!!

…and this is me leaning out of one of the upstairs windows – being young and slim I always got roped in to modelling both my own and other students creations for photo shoots and shows so I thought it might be fun to show you fashion in the seventies. 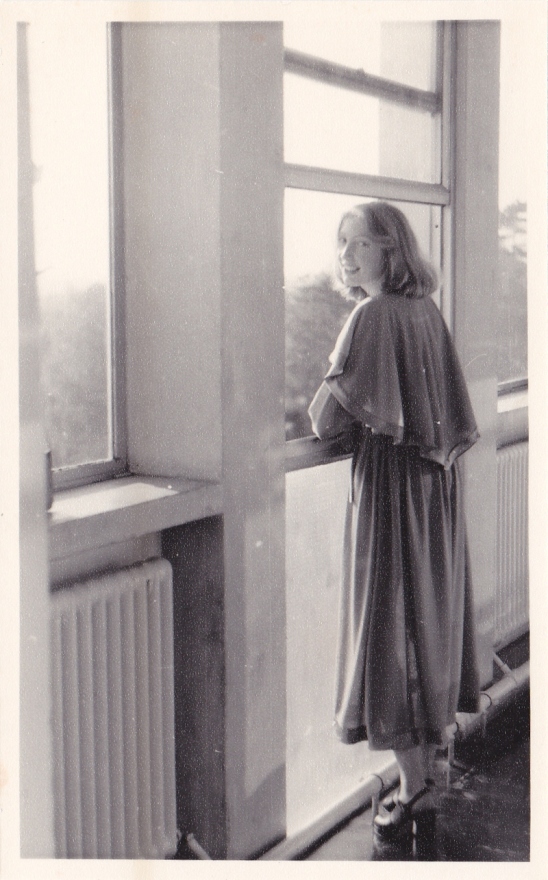 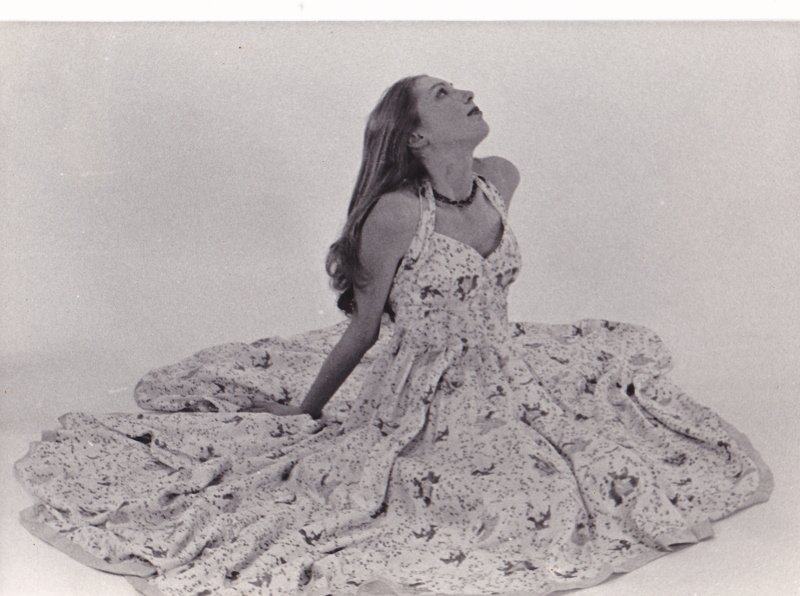 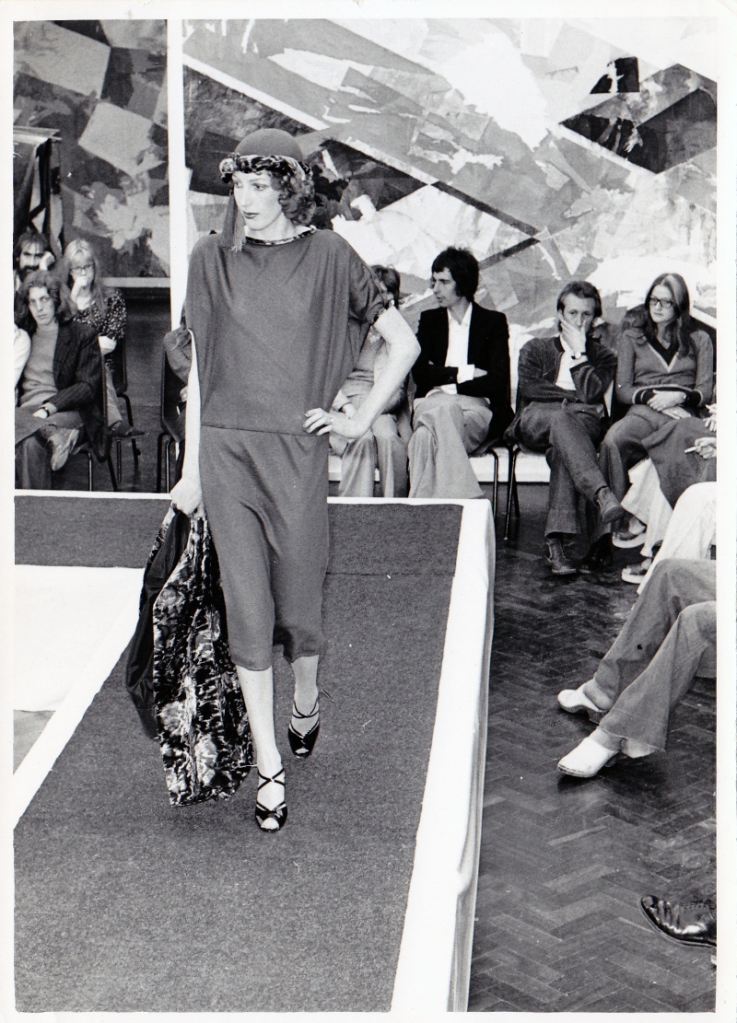 It was usual during our course to be involved in projects with fabric manufacturers like Courtaulds promoting their new fabrics.  We would be sent rolls of various fabrics and had to design outfits to suit.  This one was a hit with ICI fibres and was featured in the trade magazine Fashion Weekly – I remember that seeing my outfit in print was quite exciting – I think I even wore the coat a few times afterwards. 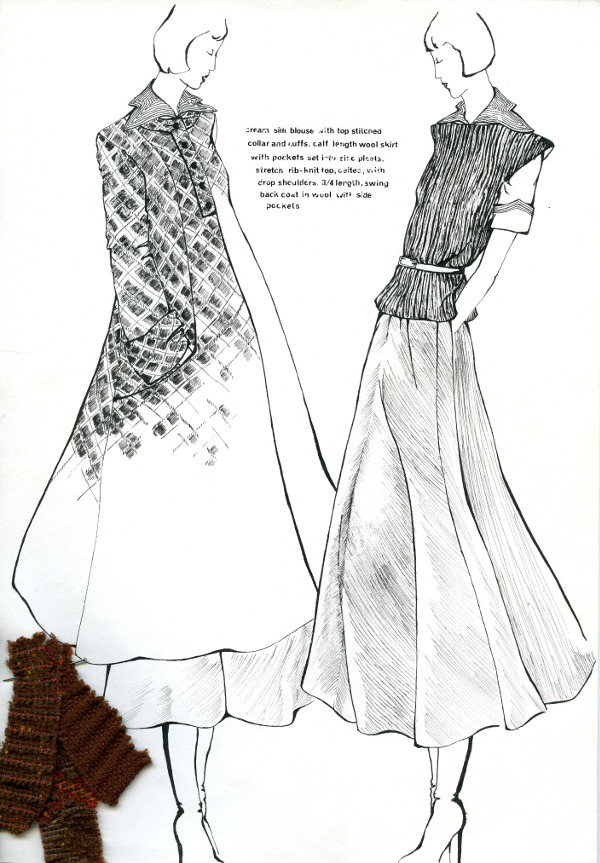 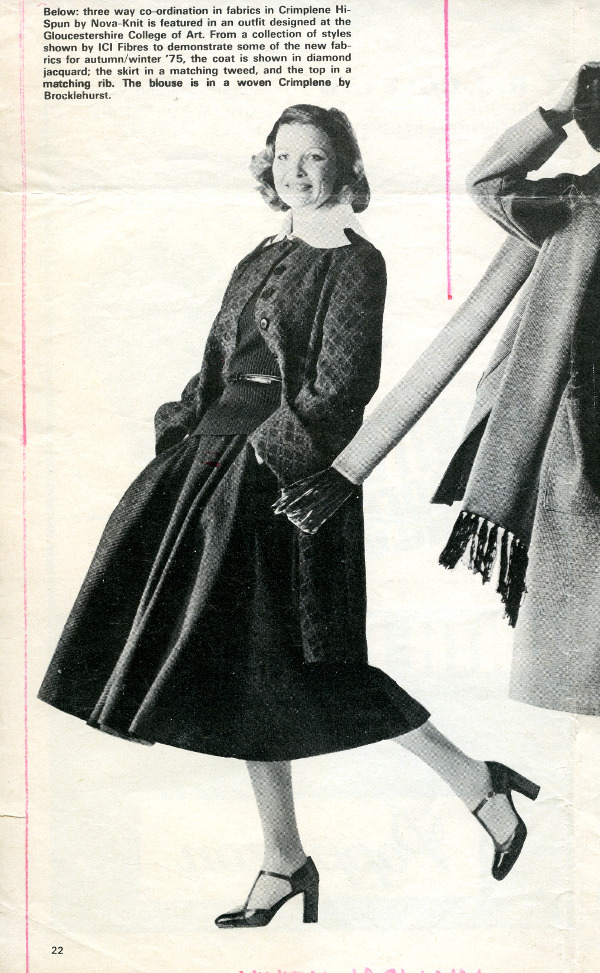 Below was a project for Heathcote fabrics in fine wool crepe and I made the coat for myself afterwards in grey wool for a trip to London – I thought I was the bees knees at the time!

Oddly whilst we were in Cheltenham I actually saw someone wearing an almost identical coat (now 40 years later – which just shows how fashions just keep coming around). 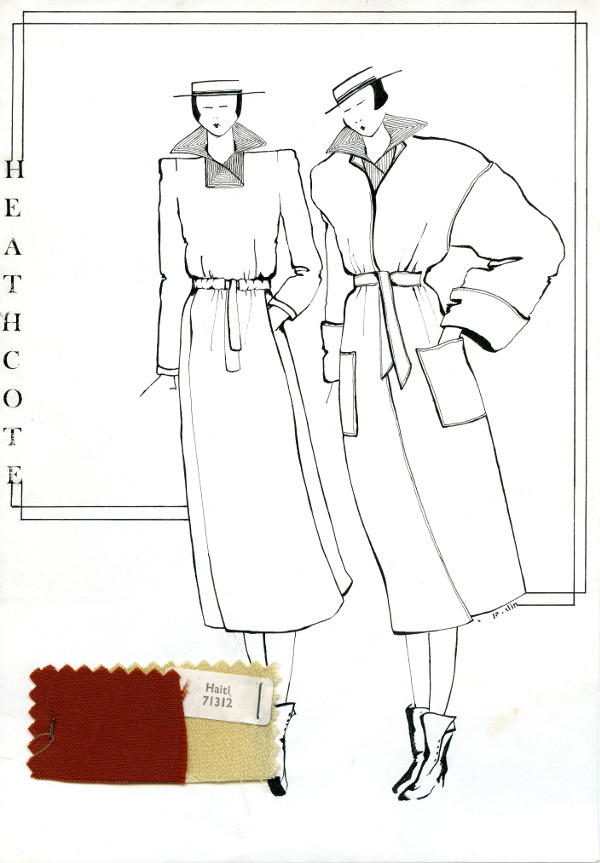 As well as the very stylised line and ink drawings I was very much into experimenting with pastels back then and drew large A3 sized freehand drawings onto coloured pastel paper which were so different to my fellow students that I worried the examiners might frown upon them. 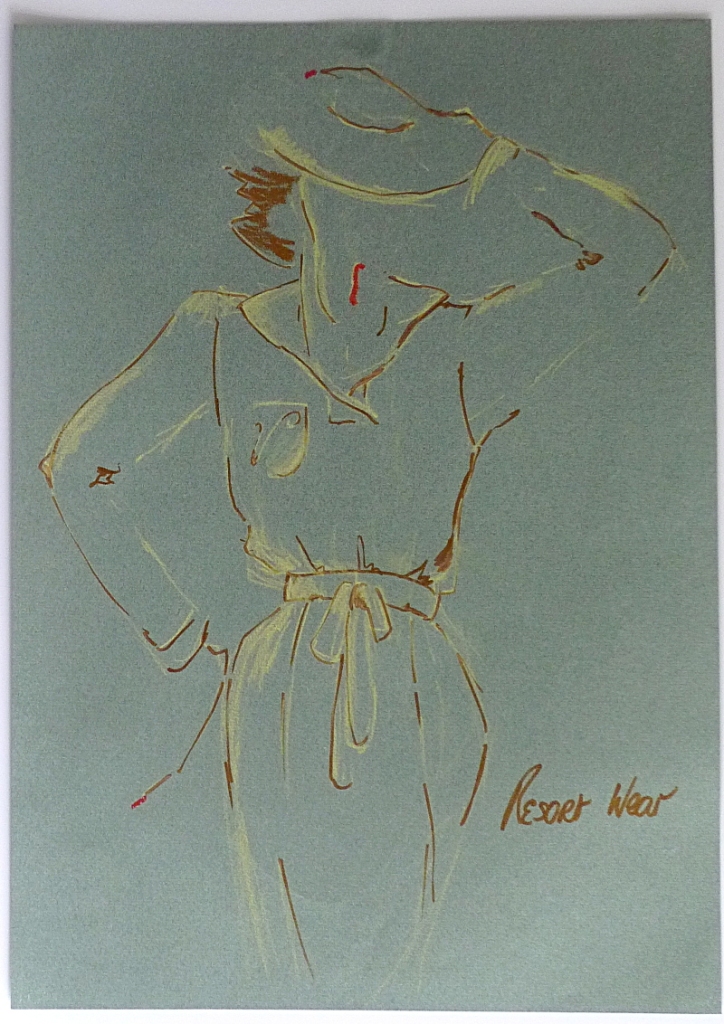 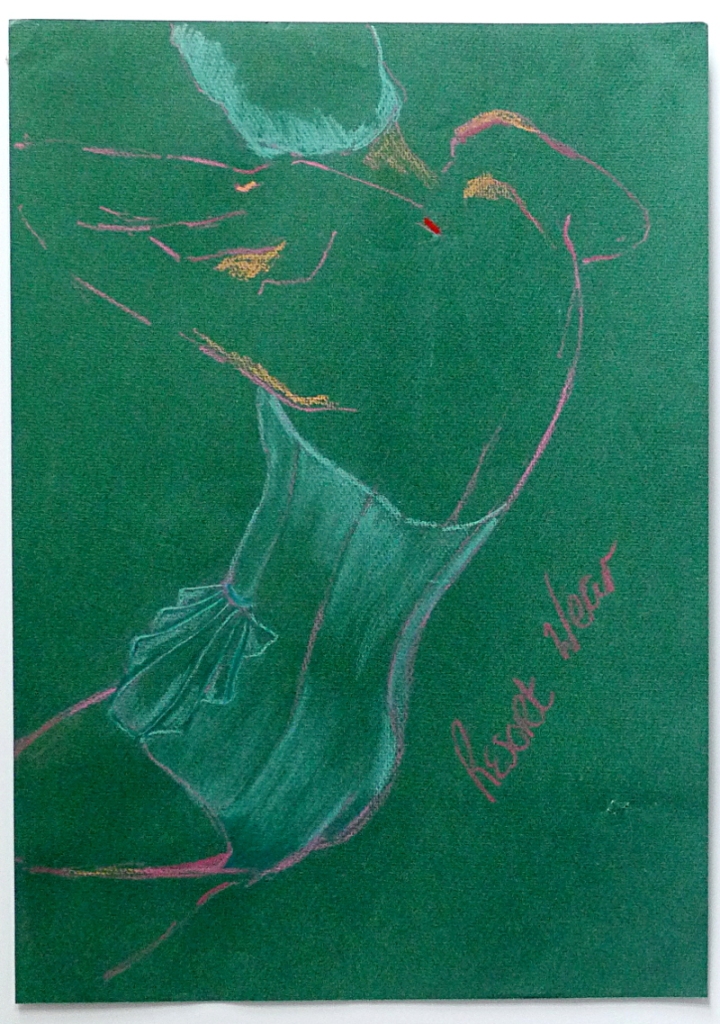 Luckily not – but all my drawings do seem a bit crude now – with all the latest technology Fashion students today produce work that looks much more professional.

When I started work at New Look patterns in Bradford I was asked to design a simple range of patterns for the fabric manufacturers Landau Sekers to team up with our Special Offer patterns – I found these old drawings the other day. 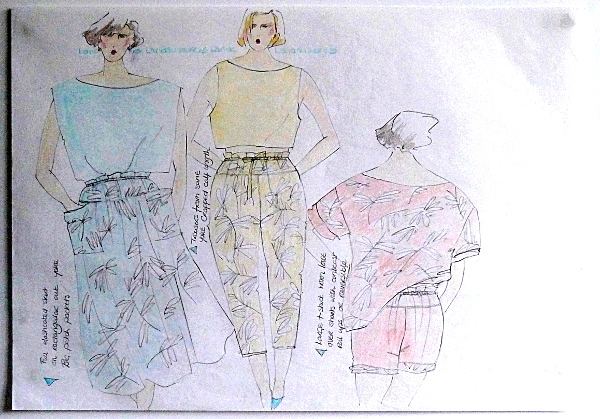 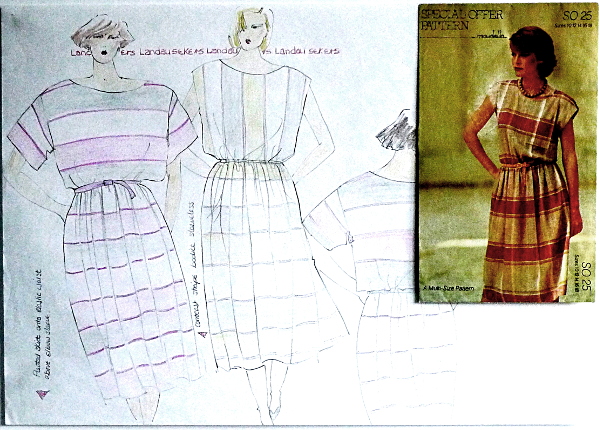 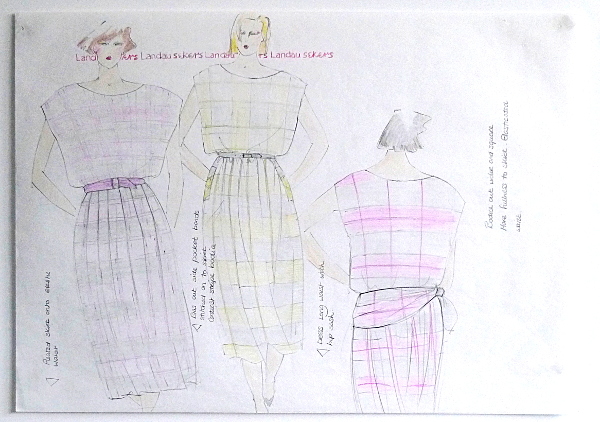 I wondered if any of the patterns I designed back then might still be available now and Googled vintage New Look patterns and sure enough among the hundreds that are featured on Google images there are many designs that I remember doing –  though in general they are not my drawings on the envelope fronts as we used a professional illustrator called Alan who lived near Warrington and each week we would send him a pack of sample clothes we had made with fabric swatches and colour guides and he sent the hand painted drawings back to be used on the envelope fronts.

So that is my recent trip down memory lane and it was much more enjoyable than I thought it would be – I just wish I could go back and do it all over again and yes I certainly do miss Cheltenham.

It is the wedding next weekend and although I have my outfit and hat I have not been so lucky with the shoes.  So off to town we went and spent all afternoon in one shoe shop or another.   The problem isn’t that I couldn’t find any I liked there were plenty… but I have a problem with the ball of my feet called Metatarsal pain and I mean pain.  Heels are definitely out but how does a girl make an outfit look elegant and dressy in flats?   Not only flat but ideally ones with a wide rounded toe and thick soles.  At last just before closing I found a pair of black patent ballerina pumps with bow and with my new gel insole inserts from the Scholl shop I might just be able to get by.  All I can say is it is a good job I am not the one who has to walk down the aisle next Saturday as it might be more of a hobble.

After a reviving hot choc drink in Costa and a slice of Tiffin (which of course I now regret – not the taste but the calories) and a rest for my aching feet we then headed off to Sainsbury’s to do the weekly shop.  I took advantage of one or two offers on things we normally buy which made the total spend a mighty £93…quite a bit higher than normal although it did include a box of red wine to indulge a long-suffering husband (whose feet also aching by this time!).  I also bought a few Easter decorations – the mini eggs and sprinkles kind as I hope to make everyone a small egg or decorated mini loaf or cupcakes.  I am waiting for inspiration.  I have an idea for my Easter cards but may not have the time to make them now I am back at work and busy all next weekend.

Tomorrow I must try on the whole wedding ensemble and make sure it all looks OK.  I can feel another shopping trip coming on for those little extras when I find my tights are not quite the right shade and the jewellery I have does not really go with the look.  Oh and did I mention the Hotel has a spa – will definitely need a new cossy. 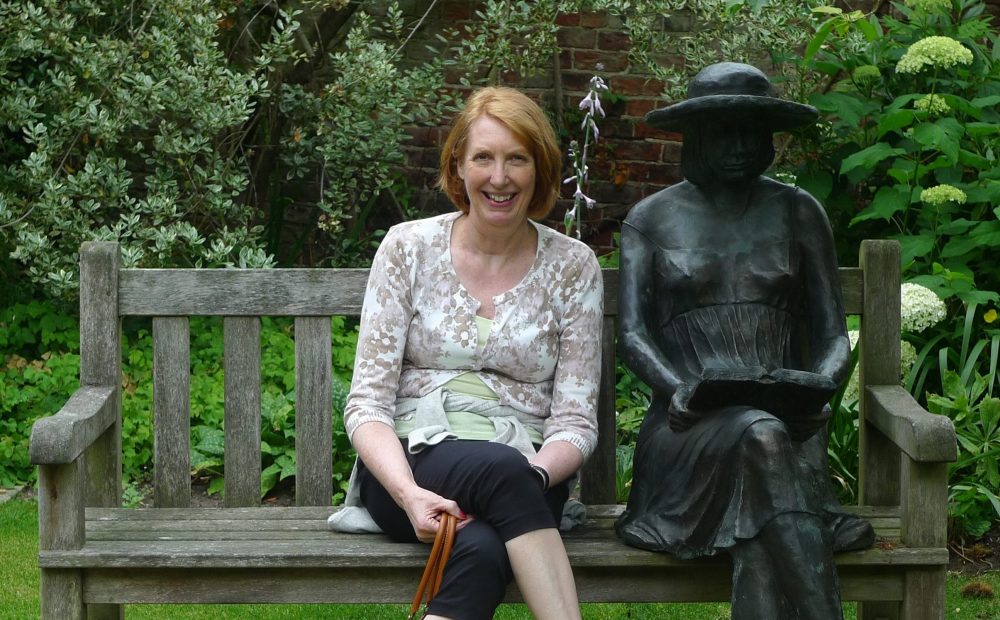