On my kitchen windowsill at the moment I am trying to root these succulents; they were originally part of a Mother’s day gift from my daughter two years ago but eventually outgrew the moss filled glass bowl they came in.  Although the arrangement was very attractive I am not actually a succulent fan and have no idea what the plants are called other than I thought one of them might be a Wandering Jew (if I am allowed to say that) or a Money plant (though I haven’t noticed it growing any yet) but I am not sure and stand to be corrected.

It seemed a shame to let them die so we rescued and repotted the two main plants in fresh compost and new pots, trimming them back to encourage more growth from the base, and the straggly parts we snipped off have been plunged into a jam jar of water in the hope that they will root.  Succulents I think are fairly easy to root from any part of the stem – again correct me here someone if I am wrong.

I was hoping they might root in time to give to the plant stall at the Christmas charity coffee morning at my local church but realise now this is a bit optimistic.

So during the week so far I have managed to do a few of my intentions from the list.  I have sent out the Not so Secret Santa wish lists and had the big draw of names out of the hat so we all know who is buying for who.  I have started the advent calendars and cut round the doors ready to decorate. I am on with arranging our family get together and present swap event and have started editing the photos for mum’s book.

Well when I say ‘I’ …OH has given me a helping hand.

In the photo there is a glimpse of my back garden through the kitchen window – it is in dire need of a tidy up and this is on my list but it has either been very cold or very wet here so that is another day and another post.

I have been concentrating on the decorating and we are almost finished so very soon I will have the big ‘guest room’ reveal.  The wardrobes have been fitted but guess what – the doors are still to be delivered because there was a scratch on the mirror.  The bed is being delivered on Monday and hopefully the doors next Tuesday – mum will follow shortly after (not delivered though!).

I am pleased with the way it looks though it has been a struggle at times finding exactly what I wanted but I have managed to throw it all together using merchandise from many different sources.  We are trying to decide on a bedside table (one we can afford and at budget price) – so at the moment we are resorting to an Ikea stool.  We also bought curtains for this room – I can’t remember ever buying curtains before – I would normally make them myself but just do not have the time.

I did buy the quilted throw I had my eye on for ages in Sainsbury’s in the double up rewards scheme they run at this time of year –  I had to hide the last one at the back of a stack of cushions on the shelf until double up day began and then go in to work earlier via Sainsbury’s that morning to make sure I got it! 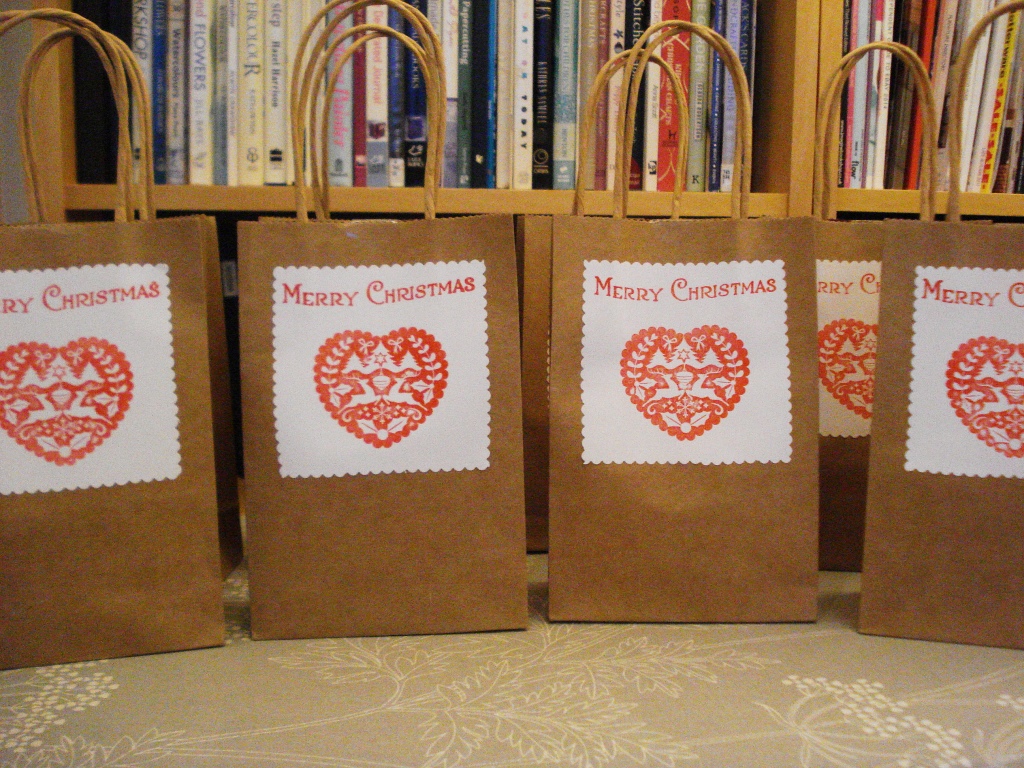 I packaged the fun sized chocolate bars, a mix of Mars, Maltesers, Milky Way etc left over from Trick or Treat night (with a few extra added) into these brown craft bags, then stuck a stamped Christmas label to the front and this will be my donation to our local church Christmas coffee morning the proceeds going to Crisis for the homeless at Christmas.

Last time I did these I made the bags myself from a roll of brown paper but being short of time I bought these from the Range a pack of 5 was £2 so not a big outlay.  I found they sold quite well as they make a nice little gift for children – they are a bit like the old selection boxes but in a bag.

I am looking forward to ticking off a few more tasks by the end of the week – how are your plans going?