Hello – I’m back – well I have been back at home for over a week but soooo busy that blogging has not been an option for me.

To say I was a little disappointed on holiday is probably an understatement.  All was going to plan, we got off on time and ambled our way up country stopping for lunch and tea and arriving at the cottage early evening.  After a good nights sleep we had a lovely day in the garden the following day with the sun shining down on us and the sea so calm with a beautiful silvery cast and then the next day it happened – my back went into spasm, I couldn’t move and I spent the rest of the holiday in pain and discomfort unable to do any gardening!! We also had to abandon the visit we had planned to go up to the Cowal Open Studios at Dunoon. (Sorry we missed you Freda if you are reading this).

OH plodded on as best he could all week in the garden trying to do as much as he could inbetween the rain and the cooking.

One or two of you asked me to bring back some pictures of the garden so I thought I would show you the progress so far to the stream bank.

Remember the flood – this was the original view at the bottom of our garden with the little wooden bridge.

After the flood we were then left with this gaping void where the sea had taken not only the bridge but a slice of both our garden on the right of the picture and the farmers land on the left.

This is what it looked like back in January this year (looking from the other direction) when the engineering work had been completed and the boundary of our garden re-established using gabion baskets to form a stable edge and then black mesh laid over to create a more natural looking banking.

This is how it looks today – the grasses and wild flowers are beginning to grow back through the black mesh and the gaping void we were left with is narrower and much less obvious now and… we have grass – you can hardly call it a lawn but it looks better than the mud heap we had up until Easter.

There were pockets of colour dotted here and there in the garden – the bright orange of the nasturtiums and Monbretia, the glossy red berries and hips and the bobbing white daisy heads of the chamomile, and of course the Hydrangeas and White Anemones. 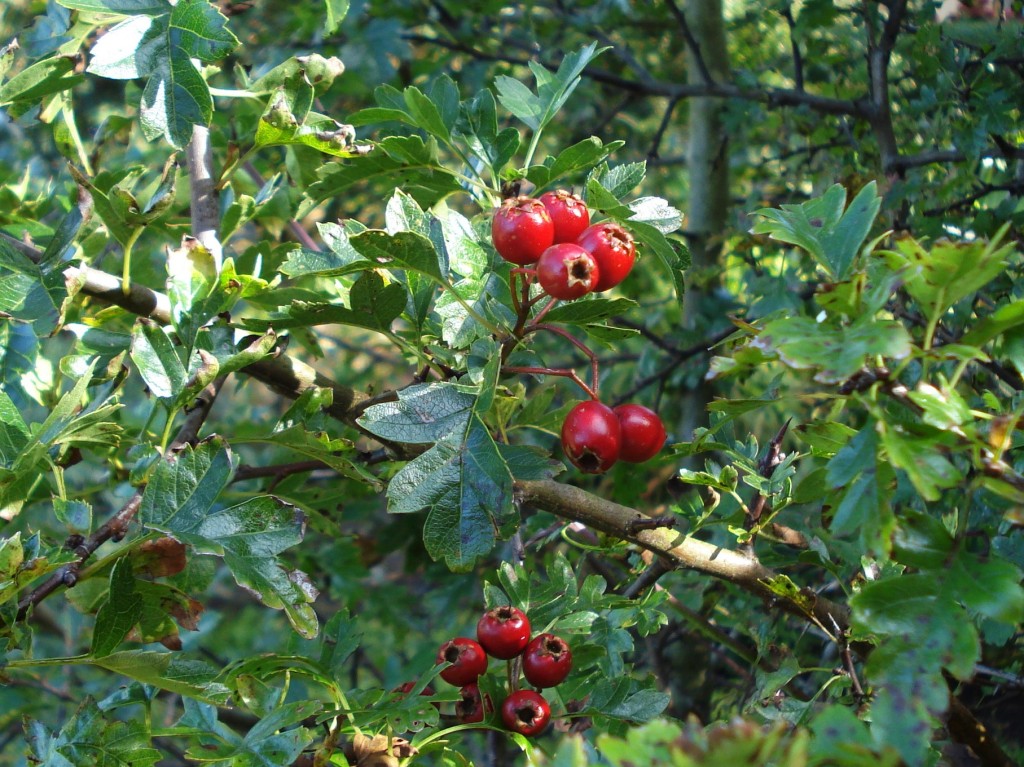 We had bought a pond cover to install over our pond to try to minimise the amount of leaves that fall into the pond at this time of year.  It was not an easy thing to put together and seemed to have a few basic design faults which added to the frustration, but it is now in place so we will have to see how it goes.

On my only day in the garden we managed to clear a patch and sow the grass seed where we wanted to extend the lawn on the wood side garden.  Once this has taken we will plant a few shade loving shrubs along the banking to give it some structure.  I am not sure the netting is going to keep out the wood pigeons.

Whilst indisposed for most of the holiday there was little to do (with no internet or TV) other than read.  I had taken a number of library books and one in particular I found quite thought-provoking and I will come back to this another day as the ideas are quite useful.  I also made use of this time reading all the diet and health articles I had clipped from my pile of magazines and taken with me on holiday. I learnt a lot and will be putting my findings into practice over the next few weeks and will share this with you.

On the last evening after having been straightened out by the local osteopath ready for the journey home the next day we celebrated with a meal out at Henry’s in Stranraer and then took a detour on the way back to the cottage to Portpatrick a delightful little harbour village.  The white-painted Harbour Masters cottage by the lighthouse with its mustard yellow window mullions and contrasting blue shutters (that are often tight shut against the winter storms) is one of my favourite houses.

As the day was drawing to an early close I captured the last of the sun setting over the Irish sea.

Back at home it has been a busy week and a half as we have been going up and down to North Yorkshire on my days off to help my younger daughter move.   She is now renting a place further away from Masham but this one has central heating and double glazing.

Luckily my back has fully recovered and I have been scrubbing cookers (she has two – an oil-fired Rayburn which they have had difficulty keeping lit and the back up electric oven in the adjoining laundry room).  I have no idea how to work a Rayburn but I hear they have already made pancakes so must have overcome the lighting problems.

I am ever hopeful that one day they will be able to afford their own home but the prices in the area are far too high for first time buyers.  Each time she rents we end up fixing things that really the landlord should be doing but typically never do.

At work it has been a round of appraisals and notice of forthcoming changes that will be implemented soon.  Since the appointment recently of two new directors we have been told to expect plenty of change.  On average I believe we have had some kind of change every three months for the past 3 years even before the new directors!  As they say nothing ever stays the same and the family feel our firm once boasted has now disappeared.  I meet people in the corridor and I don’t even know they are new employees.

Onwards and upwards.  I need to have a good catch up with everyone now.

17 thoughts on “what we didn’t do on our holidays…”